Maximize the Life Span of your Golf Simulator Projector

You’ve invested good money to buy the perfect golf simulator projector for your man cave, and now you have to start asking: how can I extend the life of my projector? Some simple maintenance will help your projector last longer and your back swing to find the right grove. If you stick to the game plan, you can avoid costly replacements and let your projector live to a ripe old age.

A projector doesn’t look like it has a filter, but don’t make the wrong assumption. The filter has an important job to play when it comes to protecting the bulb, which is the star of the show. Most projectors will have a bulb rated for a certain number of hours, between 5,000 and 30,000.

But if you really want to pocket those hours, you have to make sure the bulb stays clean and cool. The projector will suck in air, like a small vacuum cleaner, and that air will pass over the bulb. A filter keeps particles of dirt and dust from fouling up the electronics inside the housing, and if it gets clogged up, then less air will pass over the bulb and the chance of it overheating rises. Running hot can lead to premature bulb failure.

Most major brands have replacement filters that are easy to buy and install. You can also clean the filter instead of replacing it. If you are using the projector in a dusty location like a garage, it may need replaced more than if your golf simulator doubles as a basement home theater. 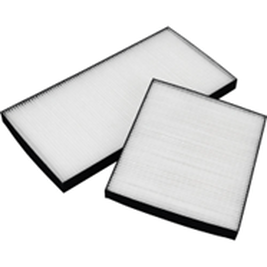 Allowing the Projector to Cool

If you can’t stand the heat…well, golf simulator projectors can’t stand heat, so telling it to get out of the kitchen won’t work. If you’re serious about extending the life of your projector, you need to keep things very cool.

Here’s why: an incandescent bulb can burn very hot, and so it makes sense that a projector can overheat if not properly maintained. If you aren’t careful, the heat inside a projector can rise enough to start causing real damage to the components within the housing. If the temperature spikes too high, you can literally melt the guts of the projector.

The filter plays a big role here, but there are other moves you can make to stay cool. You can dust regularly around the unit, but if you’re keeping the filter clean and your projector still is overheating, then you might consider using an external fan or even a cooling pad.

It takes about 30 minutes for a projector to cool after it’s been powered down. So don’t move the projector when it’s chilling. 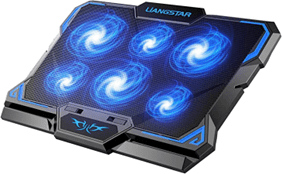 Air Intake or Exhaust Vents Should Not Have Any Obstructions

It’s hard to keep cool when you can’t breathe. If your projector isn’t in the right environment, then you might be adding fuel to the fire. You have to double-check that the intake and exhaust vents are not being obstructed. Air intake is an essential requirement for your projector to maintain an optimal lamp life.

Often, the obstruction is a complete accident: it’s the Holidays and you decide to spruce up the man cave with some mistletoe, and the next thing you know, your projector is running too hot. The rule of thumb is you don’t want any object too close to the vents. Your man cave requires good ventilation if you’re serious about extending the life of your projector. 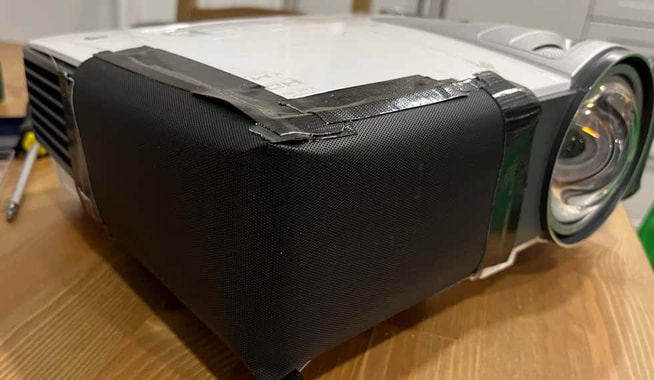 Don’t Turn Your Projector on and Off Quickly

You’re on the 18th at St. Andrews and all of a sudden you hook your drive so far left that your golf simulator has no idea where you landed. In disgust, you turn off your projector and vow never to swing a club for the rest of your life.

But five minutes later, you want a second chance and so you crank up your projector, the one you just turned off (not to mention paid good money for). It’s a new projector, rated highly, but regardless of how well-designed it is, you can’t turn projectors on and off too quickly or too frequently. They aren't built for operating in that manner.

Each time you turn the bulb off and then on will take its toll, as this thermal stress will wear down the bulb and its lamp life will shrink. You need to wait at least 15 minutes between powering off and powering on, but an hour would be ideal. If the fan is still running, the bulb is too hot and you should leave your projector alone. In fact, it’s better for the projector to leave it on all day instead of unplugging it several times per day.

But your projector should be turned off when you are finished using it. Just make sure you’re completely done.

Handle the Bulb with Care

There are times in life when you need to handle something with kid gloves. Replacing the bulb on your golf simulator projector is one of those times, especially if your goal is extending its lifespan. Fingerprints in the wrong place can really harm the functionality of your prized possession.

You might be thinking: unscrew the old bulb, screw in the new bulb, what’s the big deal? Manufacturers suggest not touching certain parts of a replacement bulb, like the arc tube or the inside reflector, because doing so can lead to the bulb’s premature failure, poor resolution, and loss of projection brightness.

Wearing cloth gloves or using a cloth rag is the preferred method in this situation. Changing the bulb inside a projector can become awkward and you can mess up the bulb without realizing it.

But your projector should be turned off when you are finished using it. Just make sure you’re completely done. 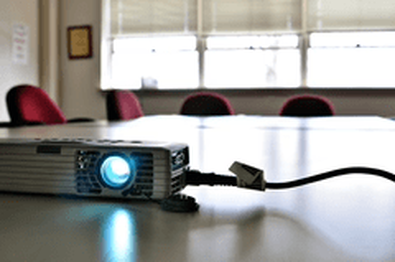 Protect the Projector from Golf Balls

In a perfect world, everybody’s golf simulator projector will be mounted on the ceiling behind the hitting area. That way, no balls will ever get smashed into this expensive piece of electronics. But the world isn’t perfect.

If you have a short-throw projector, it’s probably sitting on the floor in front of the hitting area. You have to protect your projector, and the best way to do this is by using a shield of some kind. The cost can run up to $300, but if you’re an enterprising DIY type, then you could retrofit any sort of cage around the projector and still save it from damage.

While you’re at it, make sure no well-struck balls will bounce back and hit you in the face. 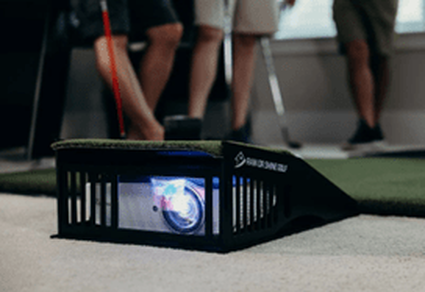 When it comes to getting more life out of your golf simulator projector, there are many easy steps you can take. Replacing bulbs and other components can get costly, so simple maintenance can make a big difference. Warranties typically don’t cover the wear-and-tear that can break your projector down. Lamp life will suffer if you are constantly unplugging the projector. When in doubt, always wear gloves when working on your projector and perhaps dust around it a bit more frequently.